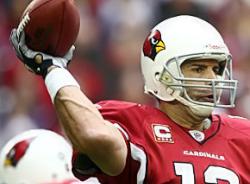 Kurt Warner is reviving his career in the desert as he hit 24 of 33 for 279 yards with one touchdown and an interception as the Arizona Cardinals clinch the NFC west by beating the Rams 34-10.  The loss drops the St. Louis to 2-10 on the year.  Warner, a MVP candidate has led the Cardinals to an 8-5 record.

When I spoke with Warner during the off-season at a charity event in Jefferson City, he seemed confident in his abilities that he could still lead the Cardinals even though it was clear the future of the team is resting on the shoulders of Matt Linert. Click here for my Press Box Podcast with Kurt Warner.

While Warner put up decent numbers, it was the Arizona defense that gave the Rams fits.  Cardinals defensive tackle Darnell Dockett returned Steve Jackson’s fumble 11 yards for a touchdown to put Arizona up 27-7 late in the third quarter..

Cardinals middle linebacker Gerald Hayes made life miserable for Jackson, forcing two fumbles on consecutive drives in the third quarter — including the fumble that Dockett scooped up for a touchdown.