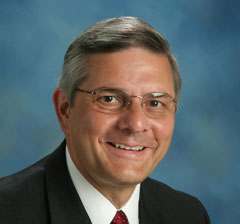 Missouri Democratic Party Chairman John Temporiti will step down as party chairman this weekend, shortly after a resurgent Democratic Party took back the governor’s office and captured five of the six statewide offices.

Temporiti took over as chairman two years ago. Temporiti says he has been talking with Governor-elect Jay Nixon about some possibilities, but he would not be specific about what those might be. Democrats meet this weekend in Columbia to elect new officers.

Under Temporiti, Democrats focused on fund-raising in an attempt to close the wealth-gap with Missouri Republicans. Temporiti says raising money was the only way Democrats could ensure that they would define themselves, not have Republicans define them with negative advertising.

Democrats took back the governor’s office Republicans captured four years ago with the election of Matt Blunt. Not only did Attorney General Jay Nixon will the governor’s office, Secretary of State Robin Carnahan easily won re-election, State Representative Clint Zweifel won Treasurer and Chris Koster won the Attorney General race. With Democrat Susan Montee not up for election as Auditor, Democrats own all statewide offices except for Lt. Governor, which Lt. Governor Peter Kinder held in the election.

A disappointment in Temporiti’s tenure is a lack of success in the General Assembly. Democrats targeted a number of seats in the Missouri House of Representatives, but gained a net of only three seats. Democrats lost ground in the State Senate, where they were weak before the 2008 elections. Republicans maintained a strong grip on the legislature.