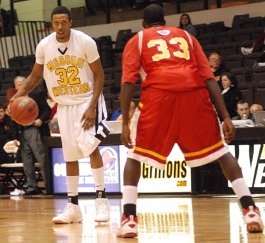 A balanced scoring attack helped the Griffons defeat the Pittsburg State Gorillas, 86-75 in the MIAA conference opener.Western had five different players in double figures as Dominique Thuston leading the way with 23 points helping the Griffons improve to 2-3 overall and 1-0 in the MIAA.

Western’s Lonnel Johnson led the Griffons as he scored 11 points on 4-of-8 shooting. The big reason the Griffons were able keep the score close at the half was they forced six more Gorilla turnovers in the half.

James Bush and Lonnel Johnson finished the game with 15 points while Marcus Rhoades and Leonard Parker had 10 apiece. Bush led the Griffons on the boards with seven rebounds and Johnson collected 3 steals as the Griffons forced the Gorillas into 26 turnovers.

The Griffons travel to Emporia, Kan. to take on the Emporia State Hornets at 7:30 pm on Saturday, Dec. 6 in White Auditorium.