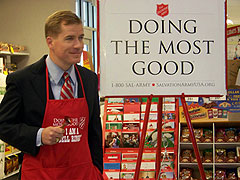 This morning Governor Blunt rang the Salvation Army bell at the Schnucks in Jefferson City to remind all Missourians to donate. The collection kettle wasn’t the usual red kettle, but instead was a clear ball.

So far this season, the Salvation Army has raised 40 percent of their goal and with just three weeks before Christmas Governor Blunt is encouraging Missourians to dig deep.

"Obviously with the national economic downturn it’s very important that we help those Missourians in need," he said. "I know Missourians are generous, compassionate people and they’ll be helping one another through their churches and organizations like the Salvation Army. I encourage everybody to lend a hand to those who are less fortunate.


The Salvation Army Spokesman says the cash that goes into the kettle turns into food, clothing and shelter for those who need it most across the state.

Previous Post: « Jamie McMurray on this week’s Pressbox Podcast
Next Post: Temporiti to step down as Democratic Party Chairman »