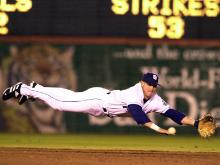 The St. Louis Cardinals finally came to terms with left handed reliever Trever Miller, and there are reports that the the Cardinals have traded with San Diego for shortstop Khalil Greene.

In return, the Padres will get two relief pitchers in return, but no names have surfaced.

As far as Miller , he will answer the lefty bullpen issue for the Cardinals after he signed a one year deal.  The 35 year old was ready to sign a two year deal two weeks ago, but the team found some damage in his shoulder labrum, so the deal was cut to one year around the $2 million mark.