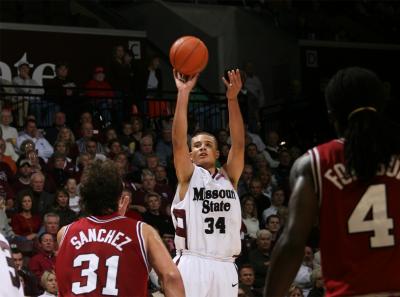 The Bears (3-2) recovered quickly from an early 6-2 deficit and went on a speedy 10-0 run over a four-minute span, capped by a three-pointer by Weems. The trey by the redshirt freshman at the 14:44 mark of the first half gave the Bears a 12-6 lead, and they never looked back. MSU extended its advantage to as many as 14 points before the half as it shot 45.5 percent from the field and 10-for-12 at the line.

UALR (5-1) went 1-for-12 from three-point range in the game and finished at 23.4 percent shooting, including just 3-for-24 in the second half. The Trojans were led by Steven Moore’s 14 points that included eight made free throws.

The Bears’ pressure defense forced 21 turnovers, including 13 in the first half, and created 23 points the other direction.  MSU also had a season high four fast break points, including two of the team’s three dunks on the night.

A second 10-0 run early in the second half by Missouri State took the Bears exactly four minutes to extend their lead to 19 points after UALR battled back within nine at the 13:37 mark on a traditional three-point play by Moore. The Bears responded with three-pointers by Jehle and Laurie and led 48-29 on a jumper by Cooks with 9:37 remaining.