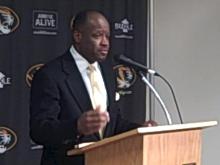 This was a great game to get the bench players some more work as the Tigers get ready for a tougher Pac-10 opponent in Cal on Sunday.  DeMarre Carroll and Leo Lyons played just 17 and 16 minutes respectively as seven bench players saw at least 10 minutes of playing time each.

Kim English led the bench with 13 points thanks to 3 of 5 three point shooting.  The offense really was the key in the game.  The Tigers shot 46% from the game but were very streaky.  Their defense led to many travels, ill-advised passes, and forced shots as the Lions starters were 9 of 30 from the floor.  As a team they made just 16 of 60.