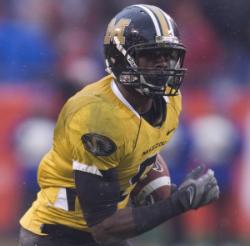 Oh C’mon, don’t tell me as a sports fan you are not superstitious?  You wear the same old ratty looking t-shirt and sit in your favorite spot in the house when you watch your favorite team play.  All fans have little quirks and superstitions.  Mine has to do with uniforms.

First, as far as the gold jerseys and their significance.  The players wanted to wear those to represent all the players who have played football at the University of Missouri.  Given the fact they lost to their rival, I doubt you will ever see that one again.
I’ve gotten mixed reviews on whether or not fans liked them.   I’m more of a fan of the old gold color, but I thought the gold wasn’t overdone thanks to the black helmet and black pants, and the fact that the mud made them look like old gold.

Now, as far as this Saturday.  The Tigers will be the road team and the Assistant AD of Media Relations for Mizzou, Chad Moller said he expects the Tigers to wear their white jerseys and white pants as they have all year.

I pointed out to Chad that last year during every critical game the Tigers played, whether in prime time or at the Cotton Bowl, the Tigers won when they wore gold pants.  Think about it.  They beat Nebraska on a Saturday night on an ABC game winning 41-6.  Black tops, first time breaking out the gold pants .  In the Border Showdown with Kansas, white jersey, gold pants , 36-28 win, #1 ranking.  Then in the Cotton Bowl, same thing with the white jersey, gold pants , 38-7 over Arkansas.

The Big 12 title game, all black, 38-17 loss to OU.  That 41-31 loss at OU earlier that season…you guessed it, white jersey, black pants.  I’m saying go with the gold pants this Saturday night.!

I was curious to find out how they determine what uniform combinations the team wears for each game. For that answer, I talked with Chad Moller.  Listen to our conversation and my plead for gold pants!