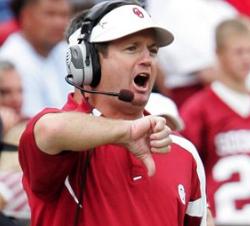 Oklahoma Sooner head coach Bob Stoops is not about to apologize for his Sooners getting the number two ranking in the BCS standings, but he also feels for Texas Tech and Texas who also finished 6-1 in the Big 12 South.  Now Stoops looks forward to Missouri.

It’s a rematch of last year’s Big 12 Championship game and Stoops talked with the media about the upcoming game, the Sooners chances at a National Championship and the status of his sophomore quarterback Sam Bradford who has torn ligaments in his non-throwing hand.

Listen to Bob Stoops, linked below.