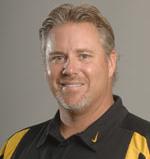 During his Big 12 Championship teleconference, head
coach Gary Pinkel announced that Missouri Tiger offensive coordinator Dave Christensen will be the next head football coach at the University of Wyoming.

Pinkel said that Christensen will call plays for the Big 12 title game and the Tigers’ bowl game, but in between during recruiting time, Christensen will recruit for the Wyoming Cowboys instead of Mizzou.

Christensen has been with Gary Pinkel for the last 17 seasons.  It was reported that Christensen interview with Wyoming in Laramie after the Tigers 40-37 loss to KU.  Christensen’s name has come up as a candidate at New Mexico and Washington.