The Tigers and Jayhawks at Arrowhead – 2008 edition … and the ending was quite different from 2007 when the Tigers rode a wave of emotion to victory. Saturday at Arrowhead the Jayhawks jumped out to an early lead, traded leads with the Tigers, then scored a touchdown with 27 seconds to go and held on for a 40-37 win before 79,123 fans. 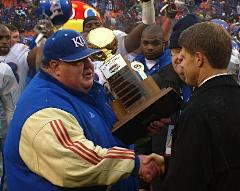 The contest began under a gloomy Saturday morning sky with a light snow falling and the Tigers donning their gold uniforms for the first time since 1984 when they lost to Notre Dame. Kansas kicked off, with Mizzou starting out on its own 28. But the Tigers’ first possession lasted prematurely as a Chase Daniel third down pass was picked off by Kansas safety Darrell Stuckey. The Jayhawks turned that opportunity into a 34 yard Jacob Branstetter field goal to make the score Kansas 3, Missouri 0.

It was the Tigers coming up with the next big play as Kenji Jackson picked off a Todd Reesing pass in the end zone to put the brakes on a KU scoring drive. Missouri turned it over not long after that as Daniel fumbled the ball in Kansas territory after a 54 yard run. The 1st quarter ended with the Jayhawks leading 3-0. Mizzou ended the quarter with 0 net yards passing as Daniel was 0-for-6 with an interception.

Just over half a minute into the 2nd quarter the Jayhawks scored the game’s first major as Reesing tossed a 9 yard TD pass to Dezmon Briscoe to cap a 9 play, 63 yard drive. Branstetter’s extra point made it Kansas 10, Missouri 0.

Daniel did not complete his first pass and the team did not pick up its first first down until Tommy Saunders snagged a Daniel pass with 13:42 remaining in the half. That was the drive that put Mizzou on the scoreboard as Daniel tossed a 5 yard touchdown pass to Chase Coffman to cap an 8 play, 62 yard drive. Jeff Wolfert’s extra point narrowed the Kansas lead to 10-7.

Kansas picked up 2 on a safety as Daniel, pinned deep in Mizzou’s own territory, was downed in the Tiger end zone. The ensuing free kick gave Kansas the ball near midfield, allowing Reesing to engineer a 10-play, 56 yard drive capped by a 25 yard touchdown pass to Dexton Fields. The Branstetter PAT made it Kansas 19, Mizzou 7.

As the half came a close, Wolfert booted a 48 yard field goal to make the score Kansas 19, Missouri 10 just before the teams went to their locker rooms at the half.

Kansas got the ball to start the 2nd half and drove down the field, covering 75 yards in 10 plays as Reesing passed 26 yards to Jake Sharp for the major. The Branstetter extra point made it Kansas 26, Missouri 10.

Missouri got it back quickly as Daniel fired a 26 yard touchdown to Jeremy Maclin put the finishing touches on a 5 play, 56 yard scoring drive. The two point conversion attempt was no good and the score stood at Kansas 26, Missouri 16.

Mizzou scored again as Jaron Baston picked off a Reesing pass to give the Tigers the ball on the KU 35. Daniel needed only 6 seconds to fire a 35 yard TD pass to Tommy Saunders. Wolfert’s PAT narrowed the Kansas lead to 26-23.

The Tigers finally took the lead with 6:52 to go in the 4th quarter as Daniel completed a 6 yard TD throw to Chase Coffman. Wolfert’s extra point made it Missouri 30, Kansas 26.

But Kansas was not done. The Jayhawks came back with a Reesing to Kerry Meier 8 yard touchdown pass and the point after making it Kansas 33, Missouri 30.

Guess what? Mizzou then struck on its next set of downs as Derrick Washington rushed for a 6 yard TD with the extra point making it Mizzou 37, Kansas 33.

But, alas, Kansas came back as Reesing fired a 4th down touchdown to Meier with 27 seconds to go. The extra point was good and Kansas led 40-37.

Mizzou had one last shot to tie it as Jeff Wolfert attempted a 54 yard field goal, but it was partially blocked and Jayhawks held on to win 40-37.

On the day, Chase Daniel completed 25 of 41 passes for 288 yards, 4 touchdowns, and a pair of interceptions.

The Tigers are back at Arrowhead next Saturday for the Big 12 Championship Game.