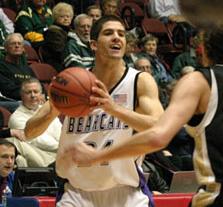 After the first regular season poll for the 2008-2009 Division II men’s basketball season, the state of Missouri has three schools ranked in the Top 25 of the NABC/D-II Coaches’ Poll.

Up near the top, ranked 7th is Southwest Baptist of Bolivar, MO.  The Bearcats are 3-0 with wins over Utah and Drury University of Springfield, who comes in at 21st with a 2-1 record.

Rounding out Missouri’s representation in the poll is the Northwest Missouri State Bearcats who are 24th with a 2-1 record.