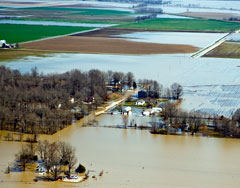 A winter of work remains as the Army Corps of Engineers tries to fix what floodwaters broke this past spring.

It wasn’t the flood of ’93, but don’t tell that to residents of northeast Missouri who lost homes, businesses and an entire crop season due to the Easter floods of 2008. Rain swollen rivers up north fed into the Mississippi which kept rising, overtopping and destroying levees from the tip of northeast Missouri to St. Louis. The US Army Corps of Engineers estimates floodwaters this past spring did $25 million damage in the St. Louis District alone. Flood damage was much more extensive and expensive up north in the Rock Island District, which includes the tip of northeast Missouri as well as much of Iowa that suffered severely from flooding.

Though the flooding devastated the Mississippi River levee system, Corps of Engineers Major Jason Taliaferro in the St. Louis District says the levees didn’t fail. Taliaferro says the levees held until floodwaters kept rising too high, overtopped them and, finally, breached them.

Federal funding for repairs has been secured. Matching grants also have been secured. Taliaferro is confident the work will be completed in time for farmers to get into the fields next spring.