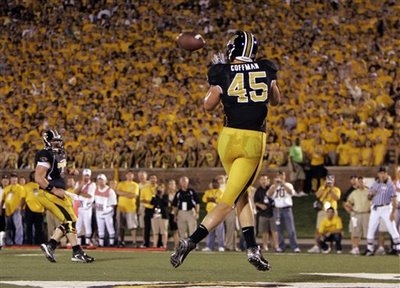 Missouri senior tight end Chase Coffman has been named a finalist for the 2008 John Mackey Award, given annually to the nation’s top tight end.  The award will go to a Big 12 Conference tight end this year, as the other two finalists along with Coffman are Jermaine Gresham of Oklahoma and Brandon Pettigrew of Oklahoma State.

Coffman has been one of the top players in college football all season long, and despite missing the last two games due to a foot injury suffered Nov. 1 st at Baylor, he still ranks among the top statistical tight ends.  In nine games, Coffman has caught 73 passes for 819 yards and seven touchdowns.

The 2008 recipient of "The Mackey" will be announced on December 11, 2008 at the Home Depot ESPNU College Football Awards Show live on ESPN and presented at the Nassau County Sports Commission Annual Awards Dinner on April 27, 2009.