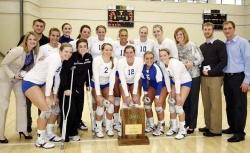 The Truman Bulldog volleyball squad secured a spot for its fifth career trip to the Elite Eight after a 3-0 sweep of win at top-seeded Emporia State by scores of 25-15, 25-14, 25-18 in the South Central Regional Championship Sunday night.

The Bulldogs (32-7) will face Nova-Southeastern (Fla.) – the South Region champion, at Concordia University-St. Paul in the Elite Eight on Thursday, Dec. 4.

Truman State advanced to the finals by beating Central Missouri. The Jennies came up short in their semi-final round match on Saturday, falling 3-1 to Truman State. The loss marks the end of the 33-year coaching career of Peggy Martin, who had already announced her plans to retire at the end of the season. The Jennies, who were ranked 12th in the latest AVCA-II Poll, finish the year at 29-10.

Truman returns to the Elite Eight for the second time under fourth-year head coach Jason Skoch. The Bulldogs’ last appearance was in 2005 at the University of Nebraska-Kearney that resulted in a 3-1 loss to the host Lopers. The Bulldogs have reached the National Championship match twice but have never captured the top spot.

Full coverage of Truman’s trip to the Elite Eight will be available on Truman’s official Athletics Web site – gobulldogs.truman.edu.

Top-seed Saint Louis claimed the championship of the 2008 Atlantic 10 Conference Volleyball Championship on Sunday afternoon at Chaifetz Arena in St. Louis. The No. 21 Billikens won their second A-10 title in three seasons by scores of 25-15, 27-2