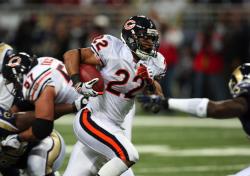 The Chicago Bears play at Soldier Field on the shores of Lake Michigan.  Judging by the chants of "LET’S GO BEARS" and the missed tackles by the Rams defense and Marc Bulger getting pounded into submission on the fifth play from scrimmage, you could almost call the Rams home field, "Wounded Soldier" Field.  The Rams played poorly again in a 24-3 loss to Chicago.

Daniel Manning returned the opening kickoff 50 yards and the Bears went to work right away and four plays later, rookie Matt Forte ran up the middle for 13 yards for a quick 7-0 Chicago lead.  On the Rams first drive of the game, Marc Bulger was sacked and suffered a concussion.

The Bears scored again in the first quarter on Kyle Orton’s seven yard pass to his fullback.  Orton started 7 for 8 including that touchdown pass.  The Bears’ Forte then delivered another knockout punch, rumbling up the middle again for 47 yards for a touchdown early in the 2 nd quarter to put the Bears up 21-0.

Once again, the Rams looked feeble when trying to stop the run.  Rams’ coach Jim Haslett said after the game he wants to do all he can to help this team win, but he can’t help them tackle.

Trent Green didn’t fare any better than the struggling Bulger has in the last few weeks.  Green was picked off four times, twice by Brian Urlacher and twice by Lance Briggs as the Rams gained just 207 total yards.