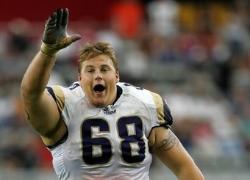 Two years ago when the Bears played the Rams in St. Louis, running back Steven Jackson got on the fans for not making enough noise and not being very supportive.  It took a long time for fans to forgive him.

Now, two years later and with not much to cheer about a 2-8 team, the fans are hearing it again for offensive lineman Richie Incognito.  After practice yesterday Incognito got on the fans by saying he was looking forward to the loud noise, even if it was coming from the opposing team.

For the last couple of years, the atmosphere in the Dome has been more like a morgue than a NFL stadium, but then again the walking wounded who wear the blue and gold haven’t really given the fans much to cheer about.

This combined with the persistent rumors that owner Chip Rosenbloom would be open to listening to offers to buy the team makes me wonder if once the economy picks up, the Rams could be sold and eventually moved to another city?

Anyway, I think it’s great when the players complain about the fans.  These guys should be focused on trying to win another football game.  When it looks like a team is putting together a half-hearted effort, what can they expect from the fans?  Heck, the Rams lost to a 49ers team that just a couple of weeks ago had their interim coach Mike Singletary drop his pants at halftime to prove a point (what that point was I don’t know), but my point is if you can’t handle a San Francisco franchise in a shambles, don’t be complaining about the lack of fan support.

This weekend, the Rams host the 5-5 Bears in a three way tie for first in the NFC Central Division.

Listen below to Incognito’s comments.