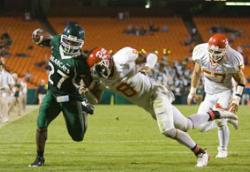 The top two teams from the MIAA meet in the second round of the NCAA playoffs Saturday when third-ranked Northwest Missouri State (10-1) hosts 10th-ranked Pittsburg State (11-1) at Bearcat Stadium. Kickoff is noon CST.

Northwest, the second seed in Super Region Four, handed third-seeded Pittsburg State its only loss of the 2008 season. The Bearcats beat the Gorillas 35-10 Oct. 4 in Kansas City on their way to a third consecutive 9-0 mark in conference play. Kendall Wright caught 11 passes for 157 yards and LaRon Council rushed for 144 yards and four scores to pace the Bearcats.

The win proved to be the difference in Northwest earning a first-round bye and a home game in round two. Pittsburg State, meanwhile, held off sixth-seeded Nebraska-Omaha 33-21 last weekend at The Pitt.

Because of the Arrowhead series, the Gorillas haven’t played in Maryville since 2000. The teams split a pair of playoff games in Pittsburg, Kan., in 2004 and 2005 with the Bearcats winning the latter.

Northwest is 3-0 and has outscored its opponents 117-42 in playoff games after receiving a first-round bye. The Bearcats are 9-1 in opening games of the NCAA playoffs and 13-3 at home under head coach Mel Tjeerdsma – the winningest postseason coach in DII history.

Northwest is the only team since 2002 to hold Pittsburg State to less than 100 yards rushing and its happened three times in the team’s last four meetings (all Northwest wins).

Gorilla quarterback Mark Smith managed 56 yards and tailback Caleb Farabi a season-low 28 against the Bearcats earlier this season. The duo in its six games since has combined to average 204 yards rushing per game.

Only four running backs have reached 100 yards against Northwest in the last 44 games. The Bearcats lead the MIAA and rank 15th nationally against the run, allowing 94 yards per game.

Northwest and Pittsburg State rank 1-2, respectively, in the MIAA in scoring, total offense and total defense. The Bearcats’ 42 points per game rank fifth nationally and their 483 yards of offense rank sixth.

Northwest senior quarterback and MIAA Most Valuable Offensive Player Joel Osbornleads the nation’s 21st-ranked passing attack. Osborn has the third-highest completion percentage in the nation at 68.8 percent. He threw for 263 yards and two scores against the Gorillas earlier this season. He’s passed for more than 1,000 yards with eight touchdowns and one interception in five games since.

Council’s 27 touchdowns lead the nation and is a Northwest regular-season record. He ranks seventh nationally in rushing and has five 100-yard efforts in his last seven games (the other two were 56-7 Northwest wins).

Anchoring the top defense in the league is Northwest junior safety Myles Burnsides, the MIAA’s Most Valuable Defensive Player. Burnsides has a team-high four interceptions and ranks third on the team with 46 tackles. His 10 stops in the season opener remains the Bearcats’ single-game high.

Northwest has allowed 24 first-half points in its last seven games. In that span, teams are averaging less than three yards a carry and less than four yards per play.