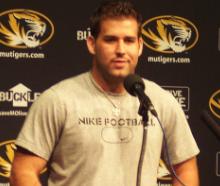 Missouri senior quarterback Chase Daniel has had his name added to yet another prestigious national award finalist list.  Daniel has been named as one of 13 finalists for the Wuerffel Trophy, which honors the college football player who best combines exemplary community service with outstanding academic and athletic achievement.

In addition to the Wuerrfel Trophy, Daniel is also a finalist for the Draddy Trophy, the Unitas Golden Arm Award, the Manning Award, and the Lowe’s Senior Class Award.  He is also a semi-finalist currently for Maxwell Award and the Davey O’Brien Award as well.

The Wuerffel is named after former Heisman Trophy winner Danny Wuerffel, who led the Florida Gators to the 1996 national championship, played six years in the National Football League and has received national recognition for his humanitarian and community service efforts with Desire Street Ministries in New Orleans.

The finalists, who were nominated by their schools’ sports information directors are (listed alphabetically):

Committee members will vote on the finalists later this month, and the winner will be formally announced on December 9th.