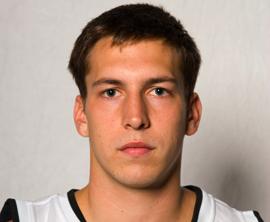 Junior Gabe Landau knocked down a pair of free throws with 4.7 seconds left to secure the Bulldogs first 2-0 start since the 1999-00 season.  Landau’s free throws helped the Truman State University men’s basketball team to a 66-62 victory over rival Quincy in Pershing Arena.

The Bulldogs led from the opening tip as the Hawks did not score their first points until the 12 minute mark of the first half.  Truman held an eight point lead at halftime and was able to extend the margin to 10 points with 1:18 to play.

The Hawks battled back with some help in the form of missed free throws by the ‘Dogs. Quincy cut it to two points with just over 12 seconds left to play.  Landau was fouled with 4.7 left and hit his clutch free throws to seal the victory.

Banks Estridge continued to light up the Hawks as he led Truman with 20 points.  Estridge came in averaging 18 in his games against Quincy, including last year’s career-high 26 point night.  The senior guard also had five rebounds, three steals and was 6-of-7 at the foul line.

The Bulldogs won the battle of the boards by a 42-30 margin including 17 offensive rebounds, five of them coming from sophomore Brandon Griffin.

Truman shot 38% from the field and made 20-of-28 free throws in the second half.

Truman will host Central Christian College on Thursday night in Pershing Arena, tip off is at 7:30 p.m.  In addition, the Bulldogs game on Saturday against Missouri-St. Louis has been moved to 6:00 p.m. to accommodate the NCAA Division II women’s soccer national quarterfinals in Kirksville.