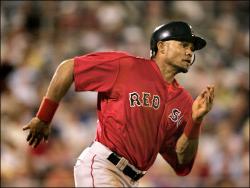 The Royals made a trade with Boston.  The Royals get veteran center fielder Coco Crisp.  In return the Red Sox get relief pitcher Ramon Ramirez.  This could open up another deal with the Cubs.

The Royals will have Crisp in center, David DeJesus will move to left field, Jose Guillen in right.  This could open up the trade where the Chicago Cubs have interest in right fielder Mark Teahen.

The Royals front office is downplaying the rumors, but now with Crisp it’s doubtful the Royals would want Cub outfield prospect Felix Pie.  Instead, they may have interest in young middle infielders Mike Fontenot or Ronnie Cedeno who could pair up as 2 nd basemen for short stop Mike Aviles.

Aviles by the way, has been playing shortstop for the Santurce Crabbers in winter ball and is hitting.281 (9-for-32) with five RBIs in nine games.

Back to the Cubs, they are in the hunt for San Diego starting pitcher Jake Peavy and may need one of their middle infielders as trade bait for that deal, so it’s possible the Royals may have to wait on Teahen.  It’s also been rumored that if the Cubs are going to get Peavy they would need to involve a third team to get the deal done…could the Royals be that third team?