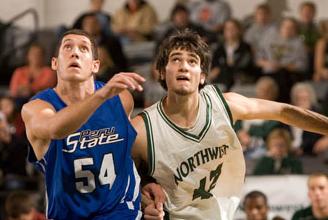 Northwest Missouri State opened its season with a 29-3 run and cruised to a 99-53 win against Peru State Tuesday at Bearcat Arena. Bearcat forward Hunter Henry led all players with 20 points and eight rebounds.

Northwest, No. 16 in the preseason NABC Poll, improved to 20-1 in season openers and 21-0 in home openers under head coach Steve Tappmeyer. Northwest has won its last 10 meetings with the Bobcats.

Henry had 14 points and five rebounds in the first half. The Bearcats shot 67 percent from the floor and led 55-17 at the break. Shawn Carter, Ben Haarman and Edriss Floyd each had eight first-half points.

Northwest led by as many as 54 points in the second half. Henry played eight minutes of the second frame and recorded the 20 th 20-point performance of his career.

Tim Ondrak had 16 points to lead Peru State. The Bobcats went 5-of-29 from the field in the first half (17.2 percent) and shot 32 percent for the game.

Northwest was 7-of-15 from 3-point range and 18-of-24 from the free-throw line. Floyd had three 3’s. Haarman and Jake Petersen each went 2-for-2 from behind the arc.