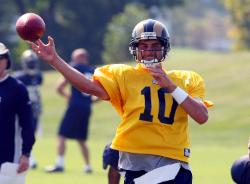 Once again this week, Rams’ interim head Coach Jim Haslett has had to stand by and defend his starting quarterback saying he is sticking with Marc Bulger despite two interceptions in a three turnover second quarter that led to 28 San Francisco points.

At this point, it may not matter who the signal caller is.  The Rams are already saying that running back Steven Jackson’s thigh muscle strain will cost him his sixth week as the injury lingers.

Doctors gave Jackson a second opinion and told him to rest another week and see what happens.

Meanwhile, seven time Pro Bowler Orlando Pace is going to be out two to four weeks after suffering a knee ligament injury.  Adam Goldberg will start in Pace’s place.

Back to Bulger, interceptions have been killing him.  Before San Francisco, Arizona’s Antrel Rolle returned a pick 40 yards for a touchdown and against the Jets, he was blindsided and fumbled leading to a 50 yard touchdown.

Yet, after looking at the tape from last week Haslett says Bulger, with the exception of a few plays, is continuing to throw the ball well.