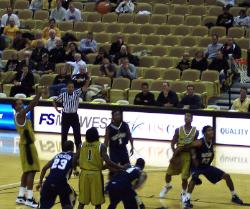 The Missouri Tigers got a final tune up before heading to Puerto Rico with a 103-75 victory over Chattanooga at Mizzou Arena.  The Tigers are 2-0 as they get ready for #23 Xavier on Thursday.

This was a good game for Missouri, playing a team with some experience and a team that scored 73 against Tennessee.  The Mocs started four seniors and a junior and at times had trouble with Mizzou’s press in the first half, but their three point shooting kept the game close in the first half.

The Mocs were 5 of 15 from the arc, but turned the ball over 12 times.  The advantage for the Tigers came at the free throw line.  Mizzou was 11 of 17 in the first half, holding Chattanooga to just nine attempts.

However, the game was tied at 29 late in the first half, when Leo Lyons hit two free throws in the bonus.  Then freshmen Kim English drove hard to the lane and scored the bucket while getting fouled.  He completed the three point play.  Then after a nice defensive stop the Tigers came back and found English in the corner who drained a three to put Mizzou up 37-29, their biggest lead of the game at that point.  The Mocs would hit another three late to cut the lead to 43-37 at the half.

The Tigers came out in the first second half and went on an inspired 11-0 run to open up a 54-37 lead.  After that run, the Mocs made a three pointer, and then converted a free throw for another three point play.  Then the Tigers answered with another 11-0 burst to push the lead back up to 65-43, capped by a two Matt Lawrence three pointers and a three point play by DeMarre Carroll.

Previous Post: « Nixon picks Simmons to run OA
Next Post: The price of your Thanksgiving meal is higher this year »