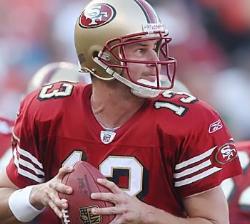 49ers head coach Mike Singletary didn’t need to pull his pants down at halftime of this game, but the San Francisco defense certainly caught the Rams with theirs down around their ankles in the 2nd quarter.

The Rams turned the ball over three times, including two interceptions by QB Marc Bulger and the 49ers turned it into four second quarter touchdowns as the Rams lost 35-16.

Much like the Missouri Tigers took it to Iowa State in the first half of their game Saturday night, the Rams too found themselves trailing 31-7 at the break.  The four offensive touchdowns by SF tied a franchise record.  We’re not talking Joe Montana and Jerry Rice, This is from Shaun Hill and Frank Gore.

Bulger told NFL.com , "We were well-prepared schematically. We just didn’t execute," said Bulger, who went 34-of-53 for 295 yards. "We turned the ball over. We couldn’t stop them. Just all-around, we didn’t play well as a team. It has nothing to do with coaches. It’s up to us to make plays, and we’re not doing it."

That tells me, the players on this roster just aren’t cutting it and getting the job done.  Not all can be blamed on Bulger, he lost two of his starting offensive linemen in the first half when Orlando Pace and Richie Incognito went down with injuries.