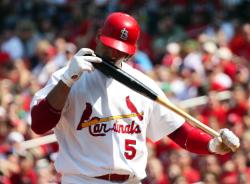 This was a no-brainer.  Cardinal first baseman Albert Pujols was named National League MVP beating out Ryan Howard and Ryan Braun.  Pujols got 18 out of 32 possible first place votes.

Pujols hit .357 with 37 home runs and 116 RBI.  He finished second in the batting title behind Atlanta’s Chipper Jones.  Pujols’ average was two points lower than his career best.