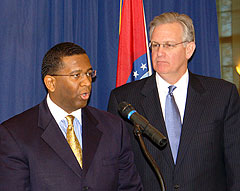 Nixon has chosen former Economic Development Director and former Public Service Commission Chairman Kelvin Simmons to serve as the head of the Office of Administration.

As Commissioner of Administration, Simmons would have much to say about an anticipated tight state budget. Simmons says he will be working closely with interim budget advisor, former state Senator Wayne Goode. Nixon has asked Goode to make a thorough review of the state budget and report back to him, soon.

Simmons brings a lot of experience to the post. He began his career in the Office of Administration and worked on the staff of Governor Mel Carnahan. Simmons served as Chairman of the Public Service Commission from 2001 to 2003 when Governor Holden appointed him to be the director of the Department of Economic Development.

Simmons must be confirmed by the State Senate.