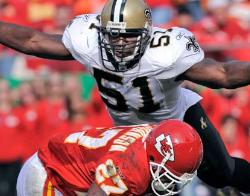 Chiefs’ defensive tackle Glenn Dorsey called it frustrating, saying it’s always just a couple of plays that are the difference between a win and a loss.  It was another loss at home as the Chiefs drop their sixth home game in row 30-20 to New Orleans.

The Saints offense can put points on the board.  It’s the fifth time this season, the Saints put up 30 or more points and Drew Brees ran his record to 4-0 over the Chiefs.  Brees was 25 of 36 for 266 yards.

He led the Saints on a well-sustained drive after the Chiefs cut the lead to seven in the fourth quarter that led to a field goal and 10 point lead.

Chiefs QB Tyler Thigpen was picked off sealing the loss, but for Thigpen it was just his first interception in 161 passes.  Once again, Thigpen played well.  He was 19 of 38 with two touchdowns to Dwayne Bowe. Thigpen even scrambled for 45 yards.   It certainly wasn’t his fault.

The Chiefs have had to patch together a defense with all of their injuries and they just couldn’t hold off the top offense in the NFL.

The problem with the Chiefs offense is they can’t find ways to get into the endzone.  They move down the field, but twice had to settle for field goals on first and goal situations.  This has been haunting the Chiefs offense all season.