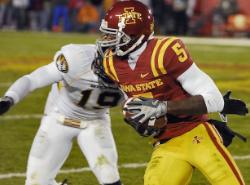 Following KU’s loss to Texas, the Missouri Tigers came out red hot on a typical cold Iowa November night, jumping out to a 31-7 halftime lead on their way to Big 12 North title and a dominating 52-20 win over the Cyclones.

I don’t think there is any doubt in any Tigers’ fan mind that if we had a choice as to who we would like to play in the Big 12 title game, it would be Texas Tech.

The Longhorns crushed the Tigers, Oklahoma State shocked Mizzou, and the Oklahoma Sooners have been in the heads of the Tigers for so long, fans cringed at the thought of a rematch with Sam Bradford.  However, get Graham Harrell and the pass happy Red Raiders in a swirling Arrowhead wind in December and let’s see how they do.

It was all Missouri in the first half, they scored on five of their first six possessions to jump to a big lead at the half.  Once the game was in control, the Tigers had some hiccups, but still found a way to outplay the winless Cyclones in Big 12 play.

Grant Mahoney hit field goals of 47 and 38 yards to make it 31-13, but Maclin answered caught a Daniel pass for 43 yards for a touchdown with 4:05 left in the third quarter to put the Tigers ahead 38-13.  This came moments after Maclin caught a third down pass, but fumbled.

Collin Franklin’s 25-yard TD catch brought Iowa State back within 38-20. But Jimmy Jackson’s 1-yard plunge early in the fourth quarter put the Tigers back ahead 45-20, and Carl Gettis picked off Arnaud at the goal line midway through the fourth quarter.  Jackson ran for a 6-yard touchdown with 3:23 left.

The Tigers have this week off, before a meaningless game against KU at Arrowhead before the Big 12 title game.