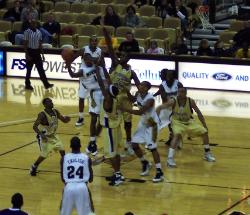 The Missouri Tiger basketball team opened up their 103 rd season of basketball with an 86-65 win over Prairie View A & M Saturday at Mizzou Arena.  After a slow start, the Tigers continued to force turnovers and handled the basketball better than their two exhibition games.

Mizzou started as slow as DeMarre Carroll missed his first two shots and nothing seemed to fall up to the first TV timeout as Mizzou trailed early 8-2.  Then over the next four minute stretch the Tigers went on a 12-2 run led by freshmen Miguel Paul (two three-pointers) and Marcus Denmon (one three-pointer) to put Mizzou up 14-0.

The Tigers extended their lead to 28-16 with 8:32 to play in the first half forcing A & M into bad shots and turnovers.  A & M turned the ball over 12 times in the first half.  Leo Lyons led Mizzou with 15 points, with Carroll and Denmon 8 each.

The Tigers closed the first half up 46-34.  The Tigers would gradually add to that lead in the 2 nd half, leading by 21 after a Justin Safford three-pointer with just under 13 minutes to play.

Leo Lyons finished the game with 21 points, DeMarre Carroll with 19.  Expect those two to be at the top of the scorer’s list most of this season.  Good first games for Marcus Denmon, 15 points, and Miguel Paul 11 points.