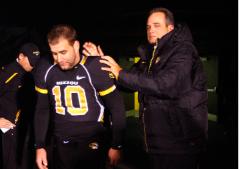 Trying to shake off the emotional effects of Senior Day, the Missouri Tigers started out slow, but got going in the 2nd quarter as Mizzou pulls away for a 41-24 win in front of a sold out crowd at Faurot Field.

With a wind chill bringing the temperatures into the 30s both offenses struggled to throw the ball early.  Chase Daniel started the first quarter just 4 for 9 with an interception.  Then the offense, caught up with great defense and special teams play and the Tigers pulled away to beat K-State 41-24.

The Tigers went to the running game after two unsuccessful drives.  After a punt, Missouri took over at their own 16 and moved the ball out to the 29 on a 13 yard run by Derrick Washington.  Daniel hit Maclin on a pass that turned into a 28 yard gain.  Then Jimmy Jackson had a huge hole open up in the middle and he went 37 yards down to the K-State 6.  On the next play, Washington went in for his 14 th touchdown of the year to put Mizzou up 7-0.

K-State playing on the heels of learning earlier in the week, their head coach Ron Prince was fired, played inspired defensive ball.  They put quite a bit of pressure on Daniel hitting him on his second pass of the game bringing an interception.  Then Daniel was chased in the second quarter resulting in a grounding penalty.

However, Missouri was able to drive down midway through the second quarter on a 13 play 52 yard drive, capped by a 32 yard field goal from Jeff Wolfert to put Mizzou up 10-0.  Their drive of 5:46 was the longest drive of the season.  That’s just unreal.  Anything over four minutes for Mizzou seems like an eternity.  Teams have been trying to slow Missouri down, but that has been just fine with Daniel who said earlier in the week, "if teams want to slow us down, we’ll take it and give our defense the break."

A turning point came with 3:25 to go in the half when Mizzou blocked a punt and took over the K-State 42.  Daniel set up a screen to Maclin who raced the distance to go up 17-0.  Mizzou took over at the K-State 31 after another failed drive and by then Mizzou was clicking.  Daniel hit Tommy Saunders to the 16, and then found Maclin in the back of the endzone and the route was on.  Mizzou went up 24-0.  Maclin’s touchdown gave him 18 for his career tying him with Justin Gage and Martin Rucker for second all-time behind teammate Chase Coffman who was out with a toe injury.

K-State managed to get a long field goal in the final seconds of the half to get on the board.  Josh Freeman of K-State didn’t do much better in the first half either.  Several of his passes were off the mark.  He was just 12 of 26 for 67 yards.

Daniel and the offense went right back to work as Maclin had big gains on a pass and reverse, but Daniel was nearly picked off in the endzone and Wolfert answered K-State’s late first half field goal with his second field goal of the game, from 24 yards out to push the lead back to 24.

Late in the third quarter, the Wildcats found the endzone on a six play 66 yard drive that ended when quarterback Freeman ran it in from six yards out.

On the first play of the fourth quarter, Maclin claimed sole possession of all-time Missouri touchdowns on a 56 yard run to quickly answer the K-State score.  The Tigers were driving again midway through the fourth quarter, but Daniel got picked off for the second time of the night trying to hit Jared Perry on a fade pattern in the endzone.  Three plays later, the K-State center snapped the ball when Freeman wasn’t looking at MU took over at the 24.

Chase Patton came in and ran for 13 yard then threw a screen pass to Perry who ran it in for the score.  It was Patton’s first touchdown pass as a Tiger.  Patton pumped his fist emphatically as Perry ran it in.  Mizzou went up 41-10 at that point.  K-State tacked on a couple of late touchdowns against the second string defense.

With a win at Iowa State and a loss by Kansas to Texas, and the Missouri Tigers will claim the Big 12 North title even before they play at Arrowhead.