Rejected in their bid for a permit to march in Columbia, members of the National Socialist Movement staged a march and rally in Jefferson City, Saturday, beginning with a 20 minute, quarter mile march that ended on the steps of the State Capitol. It was at the Capitol that the 50 or so Nazis – some carrying flags with Swastikas – spoke to a crowd of less than 100 onlookers and counter-protesters, shouting anti-immigrant, anti-black, and anti-Jewish statements. 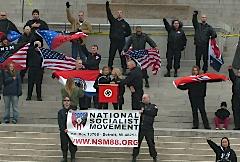 There might have been more police officers than protesters, counter-protesters, and spectators as members of the Capitol, Jefferson City, and Cole County Police, as well as the State Highway Patrol made sure the event went off without violence. Two of the counter-protesters were arrested to the delight of the Nazis, who shouted at the two individuals as they were nabbed and placed in a police van.

The event was much smaller than one held in Columbia a year-and-a-half ago. At that time, thousands of people gathered to jeer the Nazis as tehy marched through a several block area of the city.