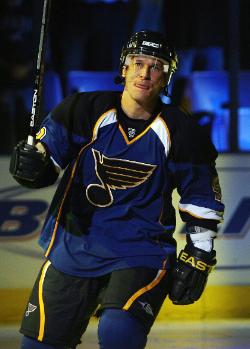 Paul Kariya, the St. Louis Blues big free agent signee of a year ago got great news on his MRI and expects to miss just one more game, tonight in Los Angeles.

Kariya left Wednesday’s game early with what the team was saying was a "lower body injury."

He was hit in the foot by a puck off the stick of former Blue Chris Pronger.  He was also dealing with hip problems, so I’m not sure which injury it was.

Kariya flew back to St. Louis and the MRI results showed no damage, so GM John Davidson said Kariya will be back soon.

On Thursday night, without Kariya, the Blues nearly toppled San Jose, the No. 1 team in the Western Conference. They were ahead 4-3 before the Sharks’ Ryan Clowe tied the score with 1:29 left in regulation, leading to a 5-4 shootout victory.

Rookie goalie Ben Bishop, making only his second start in the NHL, made 39 saves in the shootout loss.