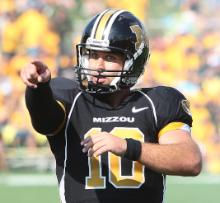 MAXWELL AWARD (Chase Daniel & Jeremy Maclin) – Daniel and Maclin are among 15 semifinalists named for the 72 nd annual Maxwell Award for the Collegiate Player of the Year.  Daniel, who was a finalist for the award in 2007, ranks 4 th in the NCAA in total offense (350.22 ypg) and is 5 th in passing efficiency (176.30 rating), while throwing for 2,993 yards and 26 touchdowns in 2008.  Maclin, who was a consensus 1 st -Team All-American as an all-purpose player in 2007, is currently 2 nd in the NCAA in all-purpose yardage (189.67 ypg) and is among the top receivers in the nation with 63 receptions for 831 yards and seven touchdowns.

BEDNARIK AWARD (Sean Weatherspoon) – Weatherspoon was named as one of 15 finalists for the 14 th Chuck Bednarik Award, which goes to the nation’s most outstanding defensive player.  Weatherspoon was named to the select list for his outstanding play in 2008, as he ranks 6 th in the NCAA in tackles through nine games (10.78 avg.).  He leads MU with 97 tackles, 13.5 tackles for loss and three interceptions – two of which he returned for touchdowns in consecutive games against Illinois and Southeast Missouri State.

THORPE AWARD (William Moore) – Moore was named as one of 13 semifinalists for the Jim Thorpe Award, which is presented annually to the top defensive back in the nation, and is named after legendary athlete Jim Thorpe.  A committee will select three finalists Nov. 24 th , and the winner will be selected by a national panel of over 50 sports writers, sportscasters, former players and coaches who vote to determine the winner.