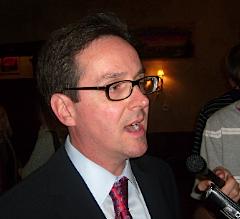 One of the big upsets of Tuesday’s election in Missouri was Republican Kurt Schaefer’s win in the 19th State Senate district in Boone and Randolph Counties. He defeated Senator Chuck Graham (D-Columbia), the Assistant Democratic Floor Leader.

Schaefer acknowledges he has benefited from dissatisfaction on the part of the people of the district. One of the issues brought forward during the campaign was Graham’s 2007 drunk driving arrest and allegations that he did not cooperate with authorities. An advertisement used during the campaign included the phrase: "You Drink … You Drive … You Lose … Unless You’re Chuck Graham."