The long campaign for Governor comes to a disappointing end for Republican candidate Kenny Hulshof, who concedes defeat to Democrat Jay Nixon. 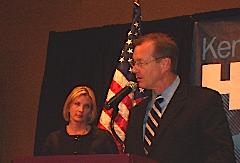 In his concession speech, Hulshof spoke of the need to end the political divisions in Missouri and to have Republicans and Democrats working together for the good of the state. He told supporters that was the message he delivered to Nixon when calling to congratulate the Attorney General on the victory.

Hulshof also stated the importance of ethics in public life, saying he would rather lose an election than lose his integrity. With his wife, Renee, standing close by, dabbing tears from her eyes, the six-term U.S. Congressman then went on to thank friends and supporters for their hard work.

Hulshof’s speech contained no hint of future plans. He did not meet with reporters afterward to take questions. Hulshof’s seat in Congress will remain in Republican hands as it was won by Blaine Luetkemeyer, who won a close contest against Democrat Judy Baker.