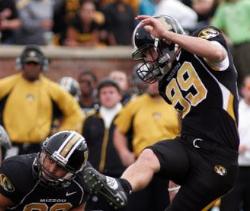 University of Missouri senior placekicker Jeff Wolfert has been named one of 20 semifinalists for the Lou Groza Collegiate Place-Kicker Award, presented by the Orange Bowl.

Semifinalists will be voted on by a panel consisting of all Division 1 coaches and sports information directors, along with national, regional and local football writers and others who will select the three finalists.  The winner will be announced on the  College Football Awards show aired on ESPN on Thursday, Dec. 11 th .