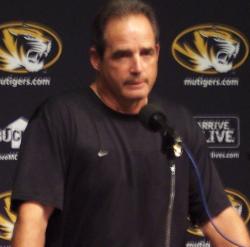 Foxsports.com ran an article that Missouri Tiger head coach Gary Pinkel is the odds on favorite to become the new coach at Washington following the firing of Ty Willingham.

Billy Witz wrote the article and gave it 2:1 odds that Pinkel would be offered the Washington head coaching job based on his past affiliations with the school.

A couple of other Missouri names have been mentioned including Washington native Dave Christensen who is Missouri’s offensive coordinator and former Rams’ head coach Scott Linehan.

If Pinkel were to take the job, he would have to take it based on the fact that it would be completely emotional.  Washington is a rebuilding program.  The facilities are outdated and need to be upgraded.  The program is in disarray.  The only reason Pinkel would take a job like this is for sentimental reasons.

Pinkel came into a Missouri situation where there were quite a few high schools in the state that wouldn’t even meet with the Tigers.  Missouri has one of the top notch facilities in the country and after seven years is now seeing the fruits of his labor, yet the team has not accomplished all it can or is possible of accomplishing.  I’m not so sure Pinkel is ready to give that up.

From Washington’s standpoint, Pinkel gives them instant credibility.  He would be a successful coach who could help jumpstart a major campaign to raise financial support for upgrades and improve recruiting efforts that have suffered in recent years.

My guess is that Christensen would have the inside track.  It would be an opportunity for him to go home and while he has been very faithful to Pinkel for a number of years, this may be a good fit for him as a head coach.  As the offensive coordinator of Missouri’s successful offense, he too could have the same positive effect that Pinkel could have on that program.