The McCain campaign makes its final foray into Missouri with a huge rally on the steps of the State Capitol in Jefferson City – with Republican vice presidential candidate Sarah Palin the star attraction of the rally. 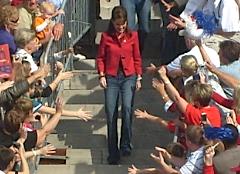 The Alaska Governor, wearing blue jeans and a red blazer, touched on familiar themes: the need for lower taxes, the desire for energy self-sufficiency, and the importance of military readiness. She was joined on stage by Governor Matt Blunt, Senator Kit Bond, and several of the Republicans running for the major offices being contested.

Also on stage was country singer Hank Williams Junior who sang the national anthem and performed a rendition of his hit "Family Tradition" which was transformed into "McCain-Palin Tradition." Williams, known for singing the opening theme on Monday Night Football, has appeared at numerous events for the McCain-Palin ticket – always wearing the jersey of the local National Football League team. At this event it was the uniform of the Kansas City Chiefs he wore.

This was Palin’s third visit to Missouri in just over two weeks. She recently appeared at rallies in Springfield and in Cape Girardeau.

Previous Post: « Joe the Candidate rallies democrats in Jackson County
Next Post: MU study confirms: this is the most negative presidential TV campaign »