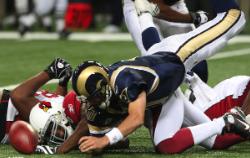 Kurt Warner returned to St. Louis and looked like the old version of the greatest show on turf throwing for 342 yards and two touchdowns as the Cardinals used a 24 point second quarter to win 34-13 over the Rams.

After Marc Bulger connected on an 80 yard touchdown pass in the first quarter to go up 7-0, it was all Arizona from there.

Bulger threw an interception that was returned by Antrelle Rolle for 40 yards to tie the game at seven.  On the next possession, Bulger fumbled at his own 23 leading to a Neil Rackers field goal to make it 10-7.  The game got away in the final two minutes.  Tim Hightower busted a 30 yard touchdown run, then Warner hit JerhemeUrban for a 65 yard touchdown pass to cap the first half scoring.

Bulger finished with three turnovers in the game as the running game was non-existent once the Rams fell behind early.  With the win, Arizona opens up a three game lead over the Rams in the NFC West

Previous Post: « Bears fall to Valley newcomer
Next Post: Bucs come back to steal one from the Chiefs »