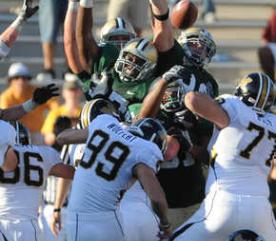 Jeff Wolfert kicked a 33 yard field goal with just about 2 ½ minutes to go to put the Missouri Tigers up for good  31-28.  Chase Daniel, while nearly getting picked off twice during that drive managed to get Mizzou in position after starting the drive on their own 10 yard line.

Brock Christopher then came up with an interception on Baylor’s ensuing drive, true freshmen quarterback Robert Griffin’s first collegiate interception in 211 passes and the Tigers hold onto to a 31-28 win to move to 7-2.

The Tigers jumped out to a 14-0 first quarter lead on two touchdown passes.  Daniel hit Chase Coffman on a three yard pass covering 65 yards in 10 plays.  In vintage Tiger fashion, the Tigers drove 80 yards in six plays with Daniel hitting Tommy Saunders on a 19 yard strike.

Daniel would hit Coffman again in the third quarter to go up 28-21 with his third touchdown pass finding his favorite target on a 13 yards pass play.  Daniel would go 30 of 38 for 318 yards with those three touchdown passes, but he was picked off twice in the game and nearly got picked off on two different occasions on that final drive.  Daniel’s last pass attempt was nearly disastrous as a Baylor safety stepped in front on a Daniel pass at the Baylor 15 and dropped the ball, otherwise he would have taken it back the other way for a touchdown had he held on.

The Tigers did a good job of containing Griffin and his scrambling abilities as he gained just 33 yards on 17 attempts, but he nearly hurt the Tigers with his arm going 26 of 35 for 283 yards, with two touchdowns.

After Griffin ran for the Bears first touchdown in the second quarter, he rallied the Bears in the third quarter.  The one time Griffin had success running came on a 4 th and 1 from Missouri’s 48, when he broke off a 34 yard run down to Missouri’s 14.  Four plays later, Baylor would score to make it 21-14.

Then, after a three an out by Missouri, Griffin brought Baylor right back down the field in 12 plays going 66 yards capped with a 16 yard touchdown pass.

It officially became a shootout, when Mizzou went up briefly by a touchdown, but Griffin brought the Bears right back on a 80 yard drive to tie the game at 28 on a 36 yard touchdown pass.