Democrat Barack Obama has a simple message for supporters gathered at the University of Missouri-Columbia: five days. 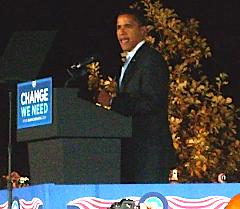 Obama reminded a large audience gathered outside at the university’s quadrangle late Thursday night that the campaign is five days away from transforming America.

"The question in this election isn’t, ‘Are you better off than you were four years ago?’ We know the answer to that," Obama stated, "The real question is, ‘Will this country be better off four years from now?’"

Obama promised a break from Bush Administration policies which he said would continue under Republican John McCain. He said the McCain campaign has offered up false choices. Obama says he offers a new politics to transform America. 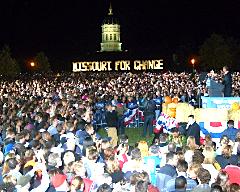 Obama sought to tie McCain directly to President Bush, especially on economic policies. Obama blamed the current economic crisis on the policies put into place the past eight years by the Bush Administration. At one time, Obama contrasted the economy under Bush with that under President Clinton, a fellow Democrat, insisting that he would return to the policies that spurred the economy during the Clinton years.

An outline of policies for an Obama presidency was given. Obama promised to change trade relationships that he said have cost the United States jobs, to end tax breaks that encourage companies to transfer jobs overseas and to invest $15 billion in renewable energy. Obama issued a promise that he would change health care policies and stop insurance companies from discriminating against the sick who need health care the most.

Another promise came during discussion of the war in Iraq. Obama said he would never hesitate to defend the country, but said it was time to quick spending billions on the war and time to hand over responsibility to the Iraqi government.

"As president, I will end this war," Obama promised to great applause from the audience.

Change has been the theme of Obama’s presidential campaign from the beginning. He told the audience that meant more than just a change of policies. He says it meant a change in attitude and a new politics that seeks to unite, not divide.