Friday it was Springfield … today … Cape Girardeau for Republican Vice Presidential candidate Sarah Palin (R-AK) as she campaigns for votes in Missouri. 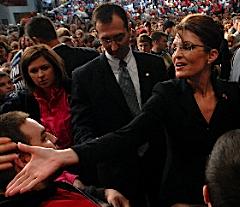 A crowd of about 8,000 people jammed into the Show-Me Center to hear Palin talk up GOP Presidential nominee John McCain (R-AZ) and to criticize the Democratic ticket of Barack Obama (D-IL) and Joe Biden (D-DE).

Palin blasted the Obama tax proposals, saying people should be rewarded for hard work, not penalized. She also went after Democrat proposals for ending the war in Iraq, saying it is only the McCain-Palin ticket talking about victory.

Energy policy was another of the topics, with the Alaska Governor embracing the “Drill baby drill” philosophy.