Democrat Jay Nixon has been Attorney General since 1992. He now wants to be governor. 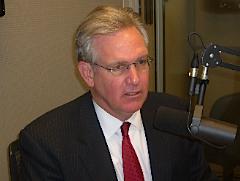 Twice, Jay Nixon ran for higher office, unsuccessful in two US Senate bids. This time, he has left behind the Attorney General office to run for governor, basing much of his campaign on a promise to restore cuts to Medicaid pushed through by a Republican Administration and legislature in 2005.

Nixon has been harshly critical of the Blunt Administration and the Republican legislature for cutting Medicaid. He tells the Missourinet that the action caused the state to pass up $1.5 billion in federal matching funds the past three-and-a-half years, because it cut Medicaid. He claims it would cost $265 million to restore the cuts and says efficiencies can keep Medicaid from growing at an unsustainable rate.

Nixon has also criticized Republicans for changing the education funding formula, saying they have shortchanged schools by $500 million dollars, though he doesn’t say he will re-write the formula and won’t give us a number of how much more schools should get. Nixon will only say that education is a key priority and that he will work off the formula the state has now.

The economy has suffered a huge downturn in the last weeks of the campaign. Nixon says that has changed his emphasis somewhat and might change his proposals. He says there is no doubt that the economy is the top issue with voters. He advocates what he calls investments in human capital, education and job training and investments in vision capital, science and research.

If Nixon wins election, he’s likely to face a Republican legislature. Though Nixon has had some high profile clashes with Republicans, he claims he can work with Republicans to move the state forward.

Previous Post: « How to get informed about the ballot initiatives
Next Post: Obama, Biden, and Palin in Missouri with less than a week to go »