Governor Matt Blunt’s decision not to seek reelection set the wheels in motion that led to northeast Missouri Congressman Kenny Hulshof (R-MO) going after the Republican Party nomination for the post. The road to securing the nomination was not an easy one as Hulshof had to engage in a bitter battle with State Treasurer Sarah Steelman (R-MO), who opted to run for the Governor’s office rather than seek reelection. 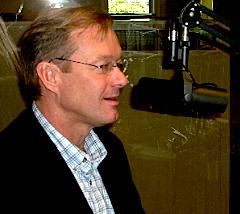 The results of the August 5th primary balloting gave the nod to Hulshof, who then launched a new campaign against the Democratic nominee – Attorney General Jay Nixon. Nixon, who had been campaigning for a number of years, has the edge over Hulshof in terms of statewide recognition and contribution dollars raised. The two differ on a number of issues from taxes to education to health care.

Residents of the 9th Congressional District are familiar with the six-term Member of the U.S. House, but he has faced the task of making himself known in other parts of the state. Hulshof grew up on a farm in southeast Missouri and left to attend the University of Missouri-Columbia where he earned a degree in agricultural economics. He later earned his law degree at the University of Mississippi.

Hulshof returned to Missouri where he served as a public defender for three years, followed by a 10 year stint as a prosecuting attorney – part of that time in the Attorney General’s office under his current opponent, Jay Nixon.

The Columbia resident first ran for Congress in 1994 as a substitute for the Republican candidate who had withdrawn from the race. Hulshof lost that race to Congressman Harold Volkmer, but managed to pick up 45 percent of the vote. Hulshof won a rematch two years later and has held the seat ever since.

Hulshof maintains he brought Missouri values to Washington and never forgot them as he tackled the many issues addressed on Capitol Hill. He is proud of his actions as a member of the House Ethics Committee when he criticized then-House Majority Whip Tom DeLay and determine that his fellow Republican had violated ethics rules. This cost Hulshof his position on the panel, but there is no doubt in the 9th District Congressman’s mind that he made the right move.

Another issues Hulshof embraced during his time in Washington was elimination of the estate tax – the so-called death tax. Hulshof managed to push the idea through the House, but it got hung up in the Senate, where supporters were unable to win the super majority needed to bring about an up or down vote on the idea. A watered-down version of the idea was eventually agreed to and is in effect today.

Hulshof has a number of ideas on how to improve Missourians’ access to such things as quality education, health care. He rejects Nixon’s proposals as ideas that will raise taxes and fall short of providing the best benefit to Missourians.

Hulshof lives in Columbia with his wife, Renee, and their young daughters Casey and Hanna.