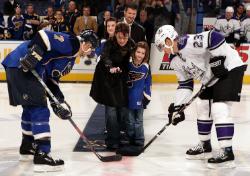 Not directly, but a fluke accident gave Blues’ goalie Manny Legacy a strained hip flexor when his skate got caught on a carpet that was rolled onto the ice for Republican Vice President nominee Sarah Palin as her and her family were at center ice to drop the ceremonial first puck.

As Legace made led his team onto the ice, he didn’t see an employee point to the carpet and as he stepped to ice he felt something in his hip pull.  Legace stayed in the game, but gave up two first period goals.