It was elbow to elbow on the parking lot of Bass Pro Shop in Springfield as Republican Vice Presidential candidate Sarah Palin (R-AK) rallied an estimated 20,000 supporters for the McCain-Palin presidential ticket. 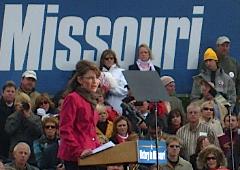 The huge crowd braved the cool and wet weather to hear the Alaska Governor talk about jobs, small business, and energy. Palin also compared Missouri to her home state of Alaska, saying both states are filled with good, hard working, all-American people. Palin then said, somewhat jokingly, “Whether you’re a Bass Pro … or a regular Joe … you can help us … this is a stretch … but you can help us reel in a big one on November 4th.”

Palin spoke for about a half hour. She was preceded by southwest Missouri Congressman Roy Blunt who criticized Democratic presidential nominee Barack Obama over his comments dealing with religion and gun rights.

Also taking part in the rally was country singer Naomi Judd, who blasted what she called the liberal media for its treatment of Palin. Mama Judd as she calls herself, then brought the crowd to its feet when she suggested putting a woman in the White House.

This rally had originally been scheduled for Missouri State University’s McDonald Arena, but was moved to a parking lot outside Bass Pro when 4,000 tickets were snapped up very quickly and many people looking for tickets were turned away, disappointed. It was clear that a larger venue would be needed to handle the throngs of people wanting to see and hear Palin.