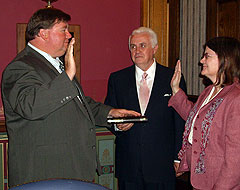 A change in scenery and a change in responsibility have occurred for Zel Fischer as he moves from the associate circuit bench to the Supreme Court bench. Fischer doesn’t see the move from Associate Circuit Judge to Supreme Court Judge as that big of a step.

"The face of justice that most people see is their associate circuit judges," Fischer says.

Fischer was a clerk for Supreme Court Judge Andrew Jackson Higgins out of law school. He had a private practice for 18 years before deciding to enter the public sector as an associate circuit judge.

"You’re eligible to come here without ever having been a judge," Fischer says, adding, "My time in the trenches as an associate circuit judge I think brings an added perspective to the court that they haven’t had in the past."

Fischer was on the list of three recommended to Governor Blunt by the Appellate Judicial Commission. The other finalists were Western District Court of Appeals Judges Lisa White Hardwick and Ronald Holliger.

Fischer, who is 45, has a degree in both philosophy and political science from William Jewell in Liberty. He received his law degree from the University of Missouri in Kansas City in 1988. Fischer had a private law practice from 1989 to 2006, until he won election to as associate circuit judge in northwest Missouri’s Atchison County.