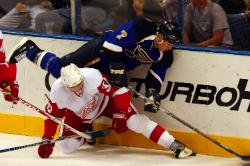 Red Wings’ Tomas Holmstrom scored in his fourth straight game as Detroit remains unbeaten on the road while snapping the Blues home winning streak at three, following a 4-3 final.

Holmstrom’s goal made it 2-0 on a power play early in the second, off a one-timer from Marian Hossa, beating Blues goalie Manny Legace.  A late second period power play goal made the score 3-0.

The Blues came back with a power-play goal in the final minute of the second period.  It was Tkachuk’s 507 th career goal.

Boyes cut the lead to 3-2 just after coming out of the penalty box. He wristed a shot past Conklin midway through the third for his fifth goal of the season.  After Detroit regained a two goal advantage late in the third, Oshie scored his first NHL goal with 1:24 left in the game after Legace came off for the extra attacker.

The Blues are back in action on Friday night and Republican Vice Presidential nominee Sarah Palin will drop the ceremonial first puck before the game against Los Angeles.