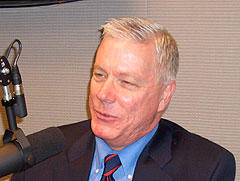 After a brief run for governor, Lt. Governor Peter Kinder decided instead to run for re-election. For 17 days, Kinder sought the Republican nomination for governor until he considered what it would take to win. He tells the Missourinet he believes he could have staggered exhausted and broke across the finish line to take on a refreshed opponent loaded with money.

His opponent, Sam Page , said that it was an enormous failure that Kinder, as the state’s advocate for senior citizens, didn’t challenge his party’s move to cut Medicaid in 2005. Kinder responds that anyone who makes that charge needs to tell the public where they want to raise taxes. Kinder rejects the criticism of Democrats on the Medicaid cuts. He says they cannot get away from the fact that the Medicaid costs were spiraling out of control at an unsustainable 17% a year. Kinder says the move simply restrained the rate of growth, noting that the Medicaid budget keeps growing.

Though Page hesitates on support of the Tour of Missouri bike race, Kinder says a University of Missouri economic impact study proves the tours worth. He says the study reaped $26.2 million in economic activity for an investment of $1.7 million in tourism tax money.

The Lt. Governor also advocates for veterans issues as well as sit on more than a dozen boards and commissions.